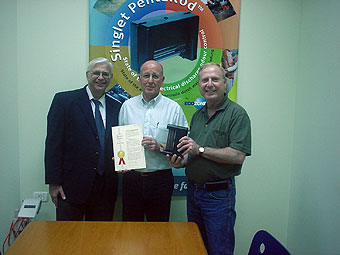 Ecozone Technologies was founded in 1995 and is based in the Hasharon Industrial Park, Kadima, Israel. It has grown into one of the global innovators in design and production of the fastest ozone machines in the world for eliminating unwanted odors.

The backbone of Ecozone is its strength in applied science to the field of ozone generation and odor removal that continues until today. The driving force behind this effort is Dr. Amram Fried who has authored numerous papers on ozone related topics and heads the company’s research division. Dr Fried received his Doctorate degree in Solid-State Physics at the Technion Institute of Technology in Haifa.

The company initiated the development of Non-thermal Plasma Air Pollution Control Technology. This research was funded by the EU as part of the ‘Fifth European Framework Program’. Work in these and related areas have resulted in U.S. patents which are the foundation of the company’s products and are known as ‘double dielectric barrier discharge technology’.

This translates to the fastest portable mobile and stationary commercial ozone generators with high ozone output which can rapidly decompose odor from various sources.
The major markets for the company’s products have been Europe, the USA and Japan.